Set XVII is a vertical view, with a Falls view over a factory view, and has a number lower right of 69875. It has the same message as the previous card:

I have just taken an extremely interesting trip through the famous Bakeries of National Biscuit Shredded Wheat here at Niagara Falls. It certainly makes one hungry to see those delicious, golden-brown biscuits in the making. [1941]

There is an open box of Shredded Wheat in the lower right corner, and the inscription in the blue strip across the bottom reads, “The Home of National Biscuit Shredded Wheat at Niagara Falls, N.Y. The back carries an inscription as a middle divider which indicates this view was printed by Tichnor Bros., Inc. of Boston, Mass. 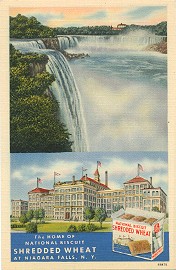 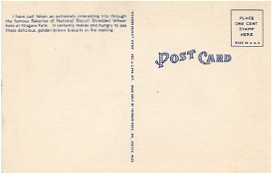 On Set XVIII, “National Biscuit Shredded Wheat” in the bottom blue strip has changed to “The Home of Nabisco Shredded Wheat at Niagara Falls, N.Y.” The card has 77066 on the Tichnor back, and comes in three different varieties. The first has a closed box lower right, which shows Nabisco/Shredded Wheat in two lines on the box, and a blue panel at the bottom of the box itself. The sky has a yellowish cast, like the card above in Set XVII. [1948]

The second and third varieties have the same appearance from the front, with the exception that the second has a lighter blue strip across the bottom than the third. The sky is now more blue than yellow. The box of Shredded Wheat pictured has no blue panel at the bottom, and Nabisco/ Shredded/ Wheat on the box is now written in three lines. The only sharp difference in these two cards is that the number on the back is in the lower left corner of the back on the second card, and in the stamp box on the third card. [1951 & 1952] 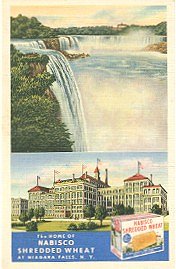 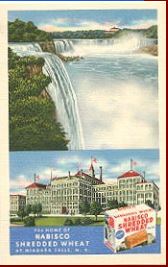 Set XVIII, C – as B, except strip across bottom is darker than B, number on back in stamp box 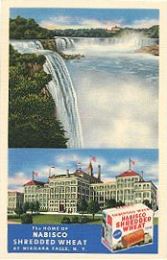 Set XVIII, A has the same back as Set XVII, Place/One Cent/Stamp/Here, & number LL 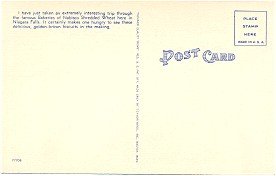 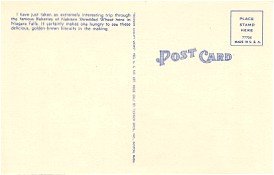 Set XIX One last view shows the Canadian Home of Shredded Wheat, has the number 86164 on the lower right front, and pictures a closed box of Shredded Wheat. The number also occurs in the stamp box on the Tichnor back. It was for use at the Canadian bakeries and verifies that tours were also conducted in the Canadian as well as the American plants. The message reads:

I have just taken a really exciting trip through the Bakeries of Nabisco Shredded Wheat! Saw them making those 3 delicious Nabisco cereals — famous Shredded Wheat, Shreddies with their tiny bite-size biscuits, and new Rice Flakes, the tasty rice cereal in flake form! 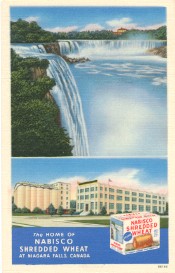 Set XIX back with new message 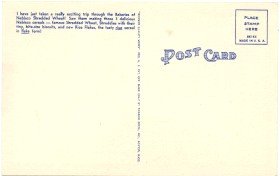 If new varieties surface, I would be glad to hear about them; please contact me at :jwalton971@aol.com.

We use cookies on our website to give you the most relevant experience by remembering your preferences and repeat visits. By clicking “Accept All”, you consent to the use of ALL the cookies. However, you may visit "Cookie Settings" to provide a controlled consent.
Cookie SettingsAccept All
Manage consent

This website uses cookies to improve your experience while you navigate through the website. Out of these, the cookies that are categorized as necessary are stored on your browser as they are essential for the working of basic functionalities of the website. We also use third-party cookies that help us analyze and understand how you use this website. These cookies will be stored in your browser only with your consent. You also have the option to opt-out of these cookies. But opting out of some of these cookies may affect your browsing experience.
Necessary Always Enabled
Necessary cookies are absolutely essential for the website to function properly. These cookies ensure basic functionalities and security features of the website, anonymously.
Functional
Functional cookies help to perform certain functionalities like sharing the content of the website on social media platforms, collect feedbacks, and other third-party features.
Performance
Performance cookies are used to understand and analyze the key performance indexes of the website which helps in delivering a better user experience for the visitors.
Analytics
Analytical cookies are used to understand how visitors interact with the website. These cookies help provide information on metrics the number of visitors, bounce rate, traffic source, etc.
Advertisement
Advertisement cookies are used to provide visitors with relevant ads and marketing campaigns. These cookies track visitors across websites and collect information to provide customized ads.
Others
Other uncategorized cookies are those that are being analyzed and have not been classified into a category as yet.
SAVE & ACCEPT